Telford Homes Ltd. accepts no responsibility for the accuracy of information displayed. | Maps are supplied by Google. | Incentives are not to be used in conjunction with any other offer. 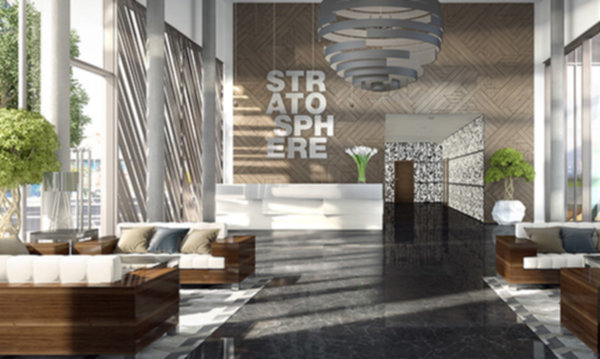 Comprised of 307 contemporary apartments including suites, one, two and three-bedroom apartments and penthouses, Stratosphere received a record number of enquiries from buyers looking for an affordable and accessible location within close proximity to Stratford and other fashionable neighbourhoods such as Shoreditch and Hoxton. The employment hubs of Canary Wharf and The City are eight and nine minutes away respectively by tube and Stratford station is a mere two minute walk from Stratosphere.

Stratford has recently benefitted from investments of more than £15bn, a growth in population equivalent to the City of Cambridge (131,000 people), and an estimated 62,000 new jobs from the Olympics and its legacy for Stratford City, Canning Town and Custom House, the Royal Docks and Beckton. As a result, this well-connected area has transformed into a new cultural quarter, offering the very best in shopping and entertainment facilities. Currently located in zone 3, Stratford is a ‘gateway’ to central London, Canary Wharf and the City, making Stratford Station one of the best connected transport hubs in the capital.

It has also recently been announced that as of January 2016 Stratford will be categorised as a Zone 2 destination on the Tube network, further emphasising its standing as one of the main transport hubs within the Capital. It also highlights its ongoing appeal as a new residential and commercial centre.
The regeneration of Stratford has been pivotal in driving growth and innovation across the City and residents of Stratosphere will enjoy living within a five minute walk of two of London’s newest and most impressive destinations – The Queen Elizabeth Park and Westfield Stratford City.
David Campbell, Group Sales & Marketing Director for Telford Homes comments:
“We are delighted with the sales success that we have seen at Stratosphere, a development which has generated exceptional demand due to the high quality build and unique design we have implemented as well as the abundance of amenities within Stratford. A significant proportion of the interest can be attributed to buyers who are looking to purchase a property in an excellent location with great investment potential. This is our third substantial tower building to launch in Stratford and we continue to view the location as the preeminent regeneration hotspot in the capital. ”
He adds: “The London 2012 Olympic Games significantly improved local transport links including its standing as a Zone 2 station from January 2016 in addition to new retail and leisure opportunities. This has attracted owner-occupiers and investors looking for well-located and premium residential property, transforming Stratford into a new metropolitan centre for London, and a leading hub for the east of London.”
Stratford underground, overground and DLR station is a mere two minute walk from Stratosphere which is located on Great Eastern Street. Travelling into central London could not be easier with direct connections to the City in eight minutes, Canary Wharf in nine minutes and the West End in under 20 minutes. For international travel, London City Airport is under 15 minutes away via the DLR, while Stansted airport is reachable by road in 36 minutes and by train in an hour. Stratford International Station provides access to the High Speed 1 rail network connecting to St. Pancras in 7 minutes and also runs direct services to Kent. Once active in 2018, the new Crossrail service will offer links to Heathrow Airport with a journey time of 42 minutes.

For more information and prices for Stratosphere please register at http://www.telfordhomes.plc.uk/stratosphere/
http://cdn.telfordhomes.net/files/press_releases/2014/Stratosphere-sales-success-release-November-2014.pdf